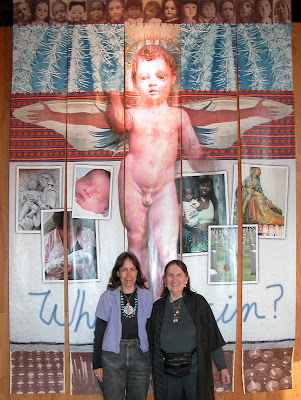 Two Highland Park artists, who are friends and neighbors, are collaborating on this month’s exhibit, “Peripheral Vision,” at York Boulevard’s MorYork Gallery.

Cidne Hart and Ruth DeNicola are well known in the local arts community. This is their third collaborative show.

The collaboration began with Cidne trudging uphill to Ruth’s house—a delightful space filled with art and found materials. The two found that they shared a love of figurative art, and especially of faces.

Cidne is a photographer and digital artist, whose collage work has been widely exhibited. For the current show, Cidne has focused on the creation of books.

“I am always experimenting and learning new processes,” says Cidne. “I realized that books could be vehicles to do a lot of artwork and corral it.”

After teaching herself bookbinding over the past year and examining the ways in which her career working with printing companies has impacted her art, Cidne has created a show in which a large volume of work will be on display in book format. Additionally, each book will be accompanied by an art piece mounted on the wall behind it.

Two books that Cidne are very proud of are fat volumes of locally-based work. One documents Ruth’s house. The other is documentation of MorYork Gallery itself. Each contains over 100 pages.

Other books on exhibit contain interesting photographs that Cidne took of railroad workers in Madison, Wisconsin in 1980 and a book of collages made for a Day of the Dead show about the war in Afghanistan in 2002.

Other books feature experimentation with process including image transfer and lamination of pages torn out of fashion magazines.

Ruth’s works, meanwhile, are assemblages. The MorYork show is by far her largest show to date, with close to 70 pieces of varying sizes on exhibit. The pieces represent about two and a half years worth of work. 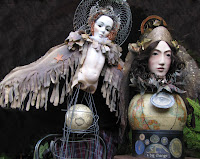 The materials Ruth, a local resident since the age of six, turns into art come from many places. Initially, her parents’ garage was a major source. There were forays to the Rose Bowl. Then friends began to give her things.

“The ones that spoke to me, I made art out of,” Ruth says.

The influence of Ruth’s work on Cidne’s work is clear; Ruth’s pieces are often subject matter for Cidne’s, and Ruth’s assemblage work has expanded Cidne’s sense of collage.

The influence of Cidne’s work on Ruth’s may not be as obvious. However, while Cidne has been working on her art books, Ruth has found herself incorporating writing into her work for the first time.

Ruth refers to Cidne’s presence in her life as “a surprise and a gift.”

The MorYork show has a bittersweet tinge to it in a couple of regards. It will be Ruth’s last large-scale show. While she retains the soul of an artist, and may still do some small pieces, arthritis has taken a toll on her ability to use a drill and to lift large pieces.

Ruth is grateful to have the opportunity to do one last grand exhibit in MorYork. “I really had a lot of art still in me,” she says.

And this will be the last show at MorYork Gallery itself.

MorYork is a cavernous space. It is primarily the private studio of assemblage artist Clare Graham. It is a fantasy world overflowing with art made from Scrabble tiles, yard sticks, puzzle pieces, rosaries, tin can lids, pop tops, doll parts—an indescribable world that has to experienced, not described.

And a great many art lovers have experienced it over the past six years. Clare, one of the co-founders of the popular NELAart Second Saturday Gallery Night, and his partner Bob Breen have graciously opened their doors monthly for exhibits by local artists.

Many venues have come and gone over the past six years. Gallery Night continues, as new venues have located to Highland Park and to Northeast L.A. in general. MorYork is one of the few remaining original venues, but Clare and Bob have found it to be time—after Cidne and Ruth’s show—to close the doors.

Assemblage has, over perhaps the past decade, become something of a Northeast Los Angeles art form, with Ruth, Cidne, Clare and other local artists drawing on the rich materials found it the attics and garages of Los Angeles’ oldest suburbs and along the Arroyo Seco and Los Angeles River. 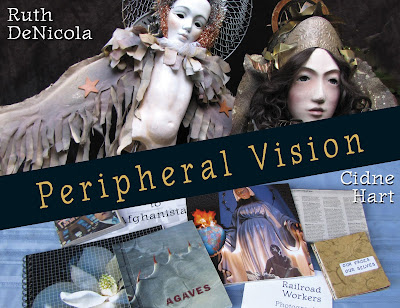 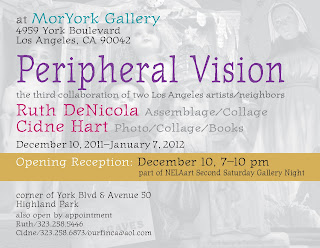 Posted by Edward Rivera at 2:36 PM

This is the primary occasion I stopover this blog. Actually this is overwhelming labor with the blog. It is extremely enjoyment to obtain it as I got enormous helps right here. I extremely be grateful for the bloggers workings and will stay for more post from the direction.

We question the method that you could actually construct this info They do be the better choice at some level but in my personal point of view, there is absolutely no damage to learn along with looking into the issues that one is currently knowledgeable. My spouse and i wish to know the points that produced you arrive at this particular essay writing concept? Maybe you can easily talk about several useful tips? This post appears somewhat not impartial.