Posted by Edward Rivera at 8:20 PM No comments:

Posted by Edward Rivera at 8:47 PM No comments: 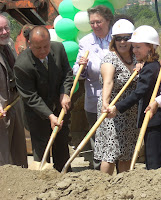 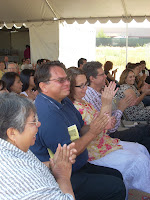 The upcoming issue of the Arroyo Seco Journal will feature Northeast L.A.’s new high school, Central High School 13, (aka Taylor Yards High), nearing completion just off of San Fernando Road. Our coverage looks at how the school will be a laboratory for innovation in education. Just to bring you up to speed, here's the back story—Arroyo Seco Journal articles from 2007 and 2008 detailing how the new school came into being.


July, 2008:
“What a glorious day!” proclaimed former State Assembly, City Council and School Board Member Jackie Goldberg as residents of Northeast Los Angeles gathered to break ground on the construction of Central Region High School #13. Among those in attendance at the June 11 celebration were community activists and elected officials who labored for years to make the much-needed new high school a reality.
The new school will be located at the former Taylor Yard rail yard, near San Fernando Road and Division Street in Glassell Park. Students from that area for generations have had to walk or take public transportation to Marshall, Franklin and Eagle Rock High Schools. The Taylor Yard school will go a long way toward relieving serious overcrowding at those schools.
According to Board of Education Member Yolie Flores Aguilar, the new construction will mean a traditional two-semester calendar for all Northeast high schools, with more time for learning. The new school may also serve as a recreation area and adult learning center for the community.
The impetus for the school clearly came from the community. Local residents envisioned it before the School District embarked on its current ambitious building plan. They chose a site where some in power had proposed warehouses, and they convinced their elected representatives to come on board. At the groundbreaking, Goldberg thanked “those who stood up when it wasn’t popular” and who brought about “a place where our children will grow and thrive.”
Central Region High School #13 will serve 2,295 students who will be divided among five small learning communities (SLCs), each with its own classrooms, teachers and administration. It is hoped that the personalized attention students will receive as part of the SLC structure will go a long way toward encouraging students to complete their high school educations. Northeast Los Angeles currently is plagued by a very high drop out rate. District wide, only about 50% of all students complete grades nine through 12 in four years. In Cypress Park, education activists estimate that the graduation rate may be as low as 25%.
At the groundbreaking, Local District Superintendent Richard Alonzo pointed out the many links between the new campus and historic sites, including the Los Angeles River, the Van de Kamps Bakery and the Portola Trail. According to Alonzo, the District is already looking beyond construction to educational partnerships. Students may have opportunities for internships with the many agencies involved in the river revitalization effort. They will also be able to take classes at the new community college under construction up the street at the Van de Kamps site.
Parent activist and LAUSD School Construction Bond Citizens’ Oversight Committee Member Scott Folsom took advantage of the opportunity to encourage everyone to “pick up pen, pencil or crayon” and oppose the Governor’s proposed draconian cuts in education funding.
“We must send the message that our children are not responsible for the budget crisis and must not pay for it,” said Folsom. [The construction] will end bussing and year-round, but we didn’t enact the [construction] bond to have larger classes and no books.”
There are other financial issues relating to the school that remain to be resolved. When former Board of Education Member David Tokofsky got up to speak and receive an award for his service to children, he thanked the lawyers who made the day possible. In 2005, the development firm of Meruelo Maddux swooped in and purchased the Taylor Yard property after LAUSD had already spent considerable money on environmental assessment and just as the District thought it was about to ink a deal for the land. Meruelo Maddux offered then owner Legacy Partners just a bit more than the District was offering, making it clear that an insider had leaked confidential information. The source of that leak has never been found. The District eventually took control of the property through the process of eminent domain. But the delay during a time of rising construction costs coupled with the need to redo environmental work mean that taxpayers will ultimately pay millions more for Central Region High School 13 than originally anticipated.
Meruelo Maddux and LAUSD are still in court over how much money the developer should be compensated for the property and who will pay for the clean-up of pollution of the site that occurred while Meruelo Maddux controlled it.
But despite the fact that controversies regarding the site have not ended, June 11 was a day of celebration. Construction equipment was already in evidence at Taylor Yard as groundbreaking participants turned gold shovels of earth—proof that the vision that had once, to some, seemed far-fetched had become a reality.
Central Region High School #13 is one of 132 new schools planned or recently opened in the Los Angeles Unified School District. The school’s first students are expected to be on campus in the Fall of 2011.


September, 2008
Local schools will soon be much smaller, due to a measure authored by local School Board Member Yolie Flores Aguilar and co-sponsored by Board President Mónica García.
The measure is designed to deal with the fact that 86% of Los Angeles Unified School District high schools, 96% of middle schools and 51% of elementary schools have populations exceeding state averages. The largest LAUSD schools are not spread evenly across the City, but are characteristic of certain districts, including the east-side districts represented by Flores Aguilar and Garcia.
According to Flores Aguilar, research has identified many benefits to small schools including improved academic performance, higher graduation and college-going rates, safer campuses, increased parental and community involvement and greater teacher satisfaction and retention.
The advantages probably boil down to the fact that students on small campuses get more personalized attention. Teachers and administrators have a better sense of where students are and what is happening with them academically and personally. The students in turn feel the fact that someone is noticing and caring.
“Size leverages possibilities,” says Flores Aguilar.
Newly constructed schools will now be limited to 500 students each (400 for middle schools). Small schools may share sites, with limits of two elementary schools and four middle or high schools per site with possible shared facilities such as gyms. Each small campus will have its own administration, staff, budget, contiguous space and responsibility for all aspects of its educational program.
By 2020, all existing campuses of 1,000 or more students, except those that specifically opt out, will be transformed into small schools.
Many parents have expressed strong support for the concept of small schools, with some willing to sit through many hours of Board of Education meetings to express their support. There has been some concern expressed at community meetings that reducing campus size is insufficient in light of large class size and lack of educational materials. However, Flores Aguilar is clear that the small schools movement is not to be seen as a panacea.
“It’s a steep climb still,” says Flores Aguilar of school reform, “but I feel we’re at least on the trajectory.”
“This is historic and revolutionary,” said Garcia as the Board of Education voted 6-1 to move forward with the small schools proposal.
In December, School Superintendent David Brewer will present the Board of Education with an analysis of options for implementation including cost analysis and specific funding resources. Implementation will happen in phases with evaluation built into the process.
Middle Schools will be a high priority for phase one. Parents at Thomas Starr King Middle School have already begun researching options for restructuring, and there is strong interest at Luther Burbank.
Posted by Edward Rivera at 6:51 PM No comments: