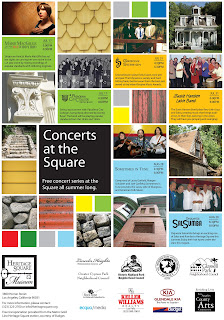 LOS ANGELES- On July 17, July 31 and August 28 step out of your car or get off the Metro Gold Line on your way home from work for a relaxing evening of live music in the historic atmosphere of the Heritage Square Museum in Highland Park.

Doors open to the public at 4:00 PM with music beginning at 5:00 PM. Arrive at the museum early to see the historic architecture up close. Visitors will have a chance to try local food and drink and shop in the museum store. Costumed docents will be on hand to enliven the evening.

Mark Holston wrote in JAZZIZ Magazine that Susie Hansen’s “violin speaks the language of Latin Jazz with total fluency." A long-time favorite in Los Angeles, Susie and her band play 175-200 live performances per year, including such events as the Playboy Jazz Festival, Fiesta Broadway, San Jose Jazz Festival, LA Salsa Festival and Newport Beach Jazz Festival. She has toured nationally with her band, and has appeared with such big names as Tito Puente.

Opening for Susie Hansen is Groove Session, who won the best jazz category from the 2007 Inland Empire Music Awards. The group has been called a “soul filled genre fused space funk odyssey!

Marie MacGillis is a seasoned performer who just released her second album with the “Model Millionaires”. Marie’s style focuses on 1920s and 30s blues and jazz, with forays into Rockabilly.

On August 28, Sometimes in Tune will play bluegrass and American folk music with a fun, energetic twist. Rounding out the series is Orquesta Salsumba, who combine the rhythms of Salsa, Rumba and Latin Jazz to create a contagious energy sure to bring you to your feet! Led by Eddie de la Fey, this 12 piece band is sure to please!

Heritage Square is a living history museum dedicated to telling the story of the development of Los Angeles. At the museum, eight historic structures, saved from demolition and moved to the site, provide a glimpse of Southern California as it looked 100 years ago. The Museum is located at 3800 Homer Street, off the 110 Arroyo Seco Parkway (110/Pasadena Freeway) at Avenue 43, just north of downtown Los Angeles. Further information is available at www.heritagesquare.org.

These free events are made possible thanks to support of several local neighborhood councils and the LA County Arts Commission, with free transportation provided from the Metro Gold Line courtesy of Budget Rent-A-Car.
Posted by Edward Rivera at 11:08 AM No comments: