The Glassell Park-based head of a human smuggling ring with ties to the Avenues street gang has been handed a stiff sentence in Federal Court. His parents have also been convicted of crimes related to participation in the ring.

Eduardo “Tito” Alvarez-Marquez, age 37, has been sentenced to 25 years in prison. He was convicted last September of conspiracy to smuggle into the United States aliens who were previously convicted of aggravated felonies and of harboring an illegal alien. He had already pleaded guilty to another alien-smuggling conspiracy. According to a statement released by the United States Immigration and Customs Enforcement (ICE), Alvarez-Marquez’ sentence is one of the longest prison terms ever imposed in a human smuggling case.

According to ICE, the smuggling ring headed by Alvarez-Marquez was responsible for bringing at least 200 undocumented people per year, who paid up to $4,500 each in fees, into the United States.

In one incident, Alvarez-Marquez refused to release an ailing 3-month-old infant to its family until a $1,200 smuggling fee was paid. In another incident, the smuggling organization locked 26 people inside a freezer truck in Imperial, California.
Alvarez-Marquez most famous client was Maria León, matriarch of the Avenues street gang Drew Street clique. (Leon is serving a 100 month prison sentence. The Leon house on Drew Street was declared a nuisance property by the City and torn down. The site is about to become a community garden.)
Posted by Edward Rivera at 9:46 PM No comments:

A Decision for Education

Although there are five small "schools" on the one large San Fernando Road campus, the board made only one definite decision today, despite other local media reports.

The authors of four other proposals have been invited to resubmit, with certain very specific questions answered, by April 25. Those proposals are Partnerships to Uplift Communities (PUC), the Los Angeles River School, ArtLAB and the School of History and Dramatic Arts (SoHDA).

PUC is a non-profit charter school management organization. The other three proposals were created by a collaborative of teachers from Marshall and Franklin High Schools.

A fourth proposal from the teacher collaborative, for a School of Technology, Business and Education (STBE), has been eliminated from consideration.

CHS 13 was one of 13 schools for which the board was conducting a special meeting in order to make decisions as to which innovative education programs will be in place in place when schools open in September.
Although the meeting was not scheduled to begin until 1 p.m. on Tuesday, supporters of various proposals began lining up outside the district’s office on the edge of Downtown by 8 p.m. Monday evening in the hope of signing up for only 13 public comment slots and of getting seats in the board room. The crowd outside began to swell about 4:30 a.m. with the arrival of Charter School supporters. It grew further with the 7:45 a.m. arrival of United Teachers of Los Angeles members.

The Board followed the recommendations of LAUSD Superintendent Ramon Cortines in making its decisions regarding CHS 13.
In singling out Alliance, Cortines praised the Charter operator for the demonstrated college readiness of its students, for its personalized learning plans and for its substantive support of English language learners, gifted students and special education students.

Although he said that there were “many good things” in the rejected STBE proposal, Cortines said that “It needed to be further developed.”

With five small schools sharing one large campus, educators will have to cooperate in order to have a doable situation. Paul Payne, of the River School proposal, asked the Board to select the four “Pilot School” proposals developed by Marshall and Franklin teachers, saying that “The four Pilot teams embody the collaborative process necessary to run this school.”
Alliance CEO Judy Burton told the Board that, throughout the development process, the Charter teams and the teacher teams were not competing against one another, but rather, were learning from one another.

PUC founder Ref Rodriguez suggested to the Board that it might actually be possible to find a way for all six schools to share the facility.

Although the CHS 13 campus itself is located in Board Member Yolie Flores Aguilar’s district, it was Board Member Steve Zimmer, who has spent his teaching career at Marshall and who has worked with many of the teachers who developed the Pilot School proposals, who opened the Board’s discussion of the Cortines recommendations for the school.
“I was inspired by the cooperation I saw at the podium,” said Zimmer.

Zimmer proposed allowing STBE to resubmit its proposal with the rest on April 25. He also said that, although he had come to be a believer in Alliance, he would like to see it return in April with more information as to how it would approach being a neighborhood school, without the option to exercise control over which students it accepts, and as to how it would address social and emotional needs of students. He asked that all six proposals be resubmitted and readdressed in April.

Five members of the Board, including local representatives Flores Aguilar and Mónica García, voted to go with Cortines’ recommendations. Zimmer was joined by only Marguerite Poindexter LaMotte in seeking to have STBE and Alliance resubmit. Flores Aguilar, who has been a staunch advocate for small schools and who drafted the motion that created the Public School Choice process leading up to today’s decision-making meeting, said that she was worried to see so many proposals recommended “with reservations.”

“It suggests we have yet to be more creative,” said Flores Aguilar.

The Board is especially sensitive to approving academic proposals with reservations, given an experience with another Northeast Los Angeles school, Luther Burbank Middle School. Last year, in round one of the Public School Choice process, a plan was approved for Luther Burbank with reservations, and it has failed, leading to emergency measures currently being taken to “reconstitute” the school.

Among the issues to be addressed by the CHS 13 applicants: The River School must cite research to support all aspects of its plan, present a better implementation plan a clear plan for assessment and better address how it will meet needs of English language learners. PUC must articulate how it will meet needs of English language learners, better discuss how all of its instructional strategies will come together in one program and present a timeline for start-up. SoHDA must incorporate a stronger focus on math and science in with its history and drama emphasis, present a better plan for meeting needs of English learners and present a professional development plan aligned with its instructional plan and a budget.

ArtLAB needs to incorporate a stronger focus on math and science, present a better plan for serving English learners and present a better data assessment and monitoring plan and a budget. All revisions must involve teachers, parents, administrators and Local District 4.

If, at its April 25 meeting, the Board finds that one or more of the proposal teams has not answered questions asked of it adequately, it will have to decide what to do with an incomplete compliment of small schools on the CHS 13 campus. This is far from the District’s intent, however; the hope is that the questions are specific enough to provide guidance in closing gaps in proposals, leading to all five spaces being filled.

That will hardly end the teams’ work, however. There will still be budgets to prepare, principals and teachers to hire and lesson plans to develop in anticipation of 1,594 students arriving in September.
Posted by Edward Rivera at 12:52 AM No comments: 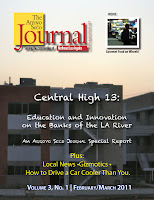 The Alliance College-Ready Charter School has been selected by LAUSD as one of five curriculum programs in the new High School #13, in Northeast LA. The Partnership to Uplift Communities, The School of History and Dramatic Arts, ArtLab, and the LA River School have been asked to return April 25, to answer more questions.

The School of Technology, Business and Education has been eliminated.

The remaining four programming slots may or not be filled following the April 25 meeting.

Look for a full update later this evening.
Posted by Edward Rivera at 6:23 PM No comments: