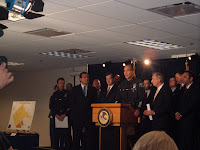 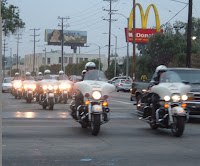 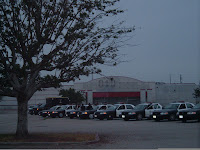 by Margaret Arnold, News Editor
GLASSELL PARK—At 4 a.m. this morning, 500 members of Federal, State and local law enforcement agencies moved into the Drew Estara area of Glassell Park in a major crackdown on the Drew Street clique of the Avenues street gang, in the largest Federal gang takedown in recent L.A. history.
Twenty-eight defendants were taken into custody on criminal charges during the sweep. Four were arrested on immigration charges. An additional 26 defendants named in the indictment were already incarcerated. Authorities are still seeking an additional 16 defendants. Cars and cash were seized during the operation.
Seventy members and associates of the gang had been named in a 157-page Federal racketeering indictment, alledging a long string of drug crimes and violent actions. The gang is said to control drug trafficking activity—and by extension, life in general—in the Drew Estara neighborhood.
The drug crimes include the sale of crack cocaine and methamphetamine.
The violent crimes listed include murder, attacks against police officers, witness intimidation and extortion of local businesses.
LAPD Chief William Bratton promised that “this morning is just the beginning,” today at an afternoon press conference in the Los Angeles Federal Building
“People who live in this neighborhood are prisoners in their homes,” said Los Angeles City Attorney Rocky Delgadillo (who attended Irving Middle School immediately across the street from where some of today’s arrests took place. “People drive two blocks to school. They don’t go out at night. This gives them back a bit of freedom.”
Some of the arrested gang members are facing the possibility of life in prison without parole.
The lead defendant in the indictment is Francisco “Pancho” Real—a familiar name to many Northeast L.A. residents. Real is alleged to be the “shot caller” among the Avenues. According to the indictment, Real, 26, collects taxes from neighborhood drug dealers. A portion of that money is then forwarded to the Mexican Mafia. Money is also raised through home invasion robberies and extortion of local business people. In one cited case, Real alledgedly threatened a local business person with threats to kill him and burn his business if not paid $30,000.
Real is the brother of Danny Leon, who was killed by police in a much-publicized incident after Leon had killed a member of a rival gang and then turned an assault weapon on police. Real was recently recognized as leader of the Drew Street clique by the Mexican Mafia.
Also named in the indictment are Real and Leon’s mother and several of their siblings.
The sweep was conducted under the authority of the High-Intensity Drug Trafficking Area (HIDTA) Task Force in conjunction with the Los Angeles Police Department. A great many agencies participated, including the FBI, U.S. Immigration and Customs Enforcement (ICE), the Sheriff’s Department, the Glendale Police Department, the Drug Enforcement Administration, the IRS and the U.S. Marshals Service.
The investigation leading up to this morning’s operation began in January with the installation of several wiretaps, which exposed the gang’s complex economics. For example, 28 firearms were seized as part of the investigation prior to today, and most were traced to Arizona, according to ATF Special Agent in Charge Christopher Shaefer.
Ten of the warrants were served by the local SWAT Team or its Federal counterparts. Commuter traffic and pedestrians were allowed on San Fernando Road and Fletcher Drive, but the side streets of Drew Estara were cordoned off. Police checked trunks and shone flashlights in any cars leaving the area, and no civilians went in. But, according to LAPD Central Bureau Chief Sergio Diaz, the officers encountered no resistance. Things began to return to normal about 6:45 a.m.
Briane Grey, DEA Associate Special Agent in Charge, said that an immediate goal of the sweep is to stem the neighborhood drug trade.
“With today’s arrest,” said Grey, “it is time to stop referring to Drew Street as a gang, and rather, as a neighborhood. It’s time to give it back to the citizens of the community.”
The violence has not, however, been contained within Drew-Estara. Glendale Police Chief Randy Adams said that his city has been terrorized by the Drew Street gang members. In a short period of time near the end of 2007, Glendale experienced five follow-home carjackings and four street robberies.
Adams says that the Glendale PD “began to set up on Drew Street because that’s where they’d always flee to.”
One of the shot callers arrested today lives in South Glendale.
The sweep was not the only anti-gang event of the day. Delgadillo also filed nuisance abatement lawsuits against ten Drew-Estara properties. Nine of the properties are located right on Drew Street. One is located around the corner on Chapman. The suits target both the landlords of the properties and the gang members or associates who use them. According to Delgadillo, the operation represents the largest scale use of property abatement actions against a street gang in the history of the City. The lawsuits seek to require security guards, security cameras, proper maintenance, tenant screening and eviction of anyone involved in narcotics activities.
Delgadillo is also seeking a requirement that owners reside on their premises.
O’Brien reports that there are about 150 to 200 active Drew Street members. That would mean that perhaps as much as a third of the clique has now been taken into custody.

Photos by Margaret Arnold.
Posted by Edward Rivera at 11:08 AM 3 comments: