Vaughantown and the Spanish Sky 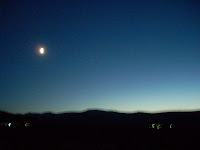 MONFRAGUE, EXTREMADURA, SPAIN—150 kilometers from Madrid near the Portuguese border, the sun is bearing down on this national park like light through a magnfiying glass burning little black ants.

Three hours from Madrid, on a four-acre, four-star resort hotel property in the shadow of Castillo de Monfrague, 10 Spanish students and 10 “Anglos” are assembled in “VaughanTown” for a week of one-on-one chats, discussions, phone calls, play performances, evening cocktails and morning coffee. The idea is to create a full-immersion learning situation for native Spanish speakers, far away from dreary classrooms.

I spent three weeks in and around Madrid this summer “working” at Vaughan Learning Systems’ two Spanish campuses, in Gredos de Avila, and Monfrague, in the region of Extremadura.

This is the basic idea: English-speaking “Anglos,” as they are referred to, are recruited from all over the world to stay in a luxury hotel here, and spend the week conversing with Spaniards. About everything. And I mean everything. Spaniards hear english as it is actually spoken, and not just by Americans.

Easy enough, right? Well, we’ll get to that in a second.

I had two misconceptions about this place at the very outset: one, that we would be dealing with stodgy Spanish executives and middle managers, and two, that this would be a vacation. Though the ages vary, the students are all youthful and dynamic. In this first week, there’s Maria Jose, the computer physicist, serious but with a streak of silliness just begging to be coaxed out of her. We spent a walk to the nearby village discussing Cary Grant movies and the creation of new computer ISDN addresses. Earlier in the week, she’d donned a wig and hideous glasses to play one of Cinderella’s ugly sisters, in a performance for the whole group.

Andres, a “Master Student” and engineer for a produce company, and I, engaged in an intense discussion of music from Nine Inch Nails and System of a Down to Springsteen, and then, as we walked back to the hotel from the village, he proudly showed me his new iPhone.

Among the “Anglos” are Carolyn, a charming teacher from Manchester Metropolitan University; Will, a young, exuberant former college baseball player here for a week before heading off to a small private school in Maine this fall to teach; Fiona McDonald, a recent Oxford graduate headed off to the world of financial planning; Margaret, from Leeds, a landscape artist who played the wicked stepmother and narrator for an improvised traditional English pantomime version of “Cinderella.” (Due to an accounting error, I was picked to play Prince Charming. I was also the only male in our little troupe).

That’s not everyone, but combined, the first week’s group is dynamic, gregarious, smart and really fun to hang around with.
But this is no vacation, really. Don’t get the wrong idea. Come prepared to talk. A lot.

Our first week’s campus is the Hospederia Parque de Monfrague in Extremadura, a region of Spain known for its blazing hot summers and its ham (There’s a chain or restaurants in Madrid called “The Museum of Ham,” to give you some indication of the importance of the local product.) There is also a luxurious pool alongside a spacious grass lawn, as well as gracious Spanish dining with attentive and courteous waiters.

Both campuses are in fact, luxury hotels, with differing and similar characteristics and facilities. The Gredos campus sits just outside the village of Barco de Avila and the famous walled city of Avila, the fabled home of St. Theresa de Avila.

Over the course of a week from Sunday morning to Friday afternoon, Anglos and Spaniards follow a set schedule that includes general conversations, and group presentations. Imagine being thrust in to a vacation with two dozen strangers, half of whom expect you to talk to them, all the time, non-stop. It is as rewarding and as draining as you might imagine. Our conversations ranged from American and Spanish politics, family issues, morality, business ethics, and well, a lot more sex than I expected. Many times I was asked the names of sexual parts of the body, or questioned as to my own sexual tastes. Oh, those Spaniards. (One Anglo reportedly spent his one-on-one-time showing pictures of his FaceBook female friends to his Spanish counterpart and explaining the American slang names for well, you can imagine).

The show is run and organized by a master of ceremonies and director, who change from week to week, and from location to location. Greg Stanford, a professor of drama at St. Louis’ University’s Madrid campus, led our first week, along with Carmen Villa, our charming and elegant director.

A mixture of corn and sincerity, Stanford engaged the group with a stream of silly jokes, scenes from Simon and Ionesco, and created an atmosphere which teetered easily somewhere between family and best friends.
“We were really fortunate this week to have such a great group,” said Stanford. “Everyone got along so well. That doesn’t happen very often. This one was magic.”

And they are always looking for Anglos, if you’re wondering.

Okay, now add to all of this the fact that this was my first trip to Spain, and my first trip to Europe. Ever. That backpack trip you took through Europe after college? I took it last month.

So everything was new to me. Gathering footage for an accompanying video of the trip, I told the camera more than once, that far more skillful American writers had traveled this road before me, and I wondered what I could add to the hundreds of years of insight.

I arrived on a flight from Munich to Madrid late on a Friday night. I saw little on the taxi ride from the airport to the city. Come Saturday morning. Boarding the clean and efficient (and air-conditioned) Madrid Metro at Ciudad Lineal on my way to the Sol Station, I ascended a flight of stairs to the street above.

As if in a wide-screen movie, I emerged on to Gran Via, on e of the main boulevards of Madrid. The whole of the street appeared before me—heat and crowds and beauty and history converged at once. I literally laughed out loud.

Though Spanish-speaking, Madrid isn’t Los Angeles, and it certainly isn’t Mexico. Having only emerged from the shadow of former dictator Francisco Franco in the mid-70s, it has re-emerged, and re-invented itself into one of Europe’s most progressive and important cities. (Following the March 11, 2004 Madrid Metro terrorist attacks, newly elected president Jose Luis Rodriguez Zapatero promptly withdrew Spain’s forces from Iraq. President Bush, not surprisingly, is loathed by most Spaniards.)

Madrid’s modern wide boulevards, and narrow streets in its historic section near the Plaza Del Sol, teem with people at all hours of the day and night. The afternoon slows slightly with the last vestiges of “siesta,” and then ratchets itself back up, going full-bore till long past midnight.

On the Friday night of my first week in Madrid, I joined a group of VaughanTown Anglos and Spaniards for dinner at Botin, the oldest restaurant in the world, according to Guinness. But before that, I strolled through the Plaza Meyor in the middle of Madrid near the dead center of Spain , as the lights began to come up, families and couples filled the Square, and a thin line of blue and purple lit the skies just over the rooftops. Magic would be too easy a word for it.

And oh, the Spanish skies.

Standing on the terrace at Monfrague on my first night, I stared up into the deepest and biggest sky I had ever seen. Miles from Madrid, thousands of stars filled the sky from horizon to horizon in a huge, mesmerizing, and humbling display of nature.

© Copyright 2008 The Arroyo Seco Journal
Posted by Edward Rivera at 5:15 AM 3 comments: