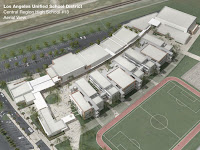 How a High School Site Got Stolen, Buried and Recovered

By Margaret Arnold
Exclusive to the Arroyo Seco Journal

Posted by Edward Rivera at 2:25 AM No comments:

The Coalition Responds: Autry’s New Accomplices: The Best That Money and Politics Can Buy

Dear Editor,
Activist Eliot Sekuler received space to insult the intelligence of our community in your last issue. The Friends of the Southwest Museum Coalition, a broad-based group with tens of thousands of constituents from over 70 organizations, including Native American supporters, wholly rejects the revisionist “history” contained in Sekuler’s opinion piece.

Now is not the time to be fooled by Autry’s new de facto spokesperson, Eliot Sekuler. He seems to act as if he speaks for our Coalition when he claims “we won.” The Southwest Museum remains threatened by the Autry National Center’s ongoing plan to take it all to Griffith Park.

Los Angeles did not win with the so-called “Southwest Museum Agreement” as claimed by the Mayor and Councilmember Huizar at a secret press conference this past September. Autry tries to paint the picture of a community “divided.” But this is not about a squabble within just the Mt. Washington community. The Southwest Museum’s future goes way beyond the “hill” where it iconically reposes as the cultural anchor of Northeast LA.

This is about Autry and what it is NOT willing to do for an underserved community. Autry refuses to provide an investment that’s remotely equitable to its ambition to raise $150 million for its Griffith Park home. Instead, Autry seeks to rob Northeast of our cultural resources and heritage.

Sekuler flip-flopped on his Mount Washington constituency as representative to the Arroyo Seco Neighborhood Council (ASNC). When political considerations led to his abandonment of the community, he asserted his own opinion as that of ASNC and was voted down and replaced as ASNC’s liaison to our Coalition. ASNC still remains a supporting organization in the Coalition, along with six additional Neighborhood Councils.

Sekuler does not need to quote Scripture to explain the real reason that he joined a few other individuals (Carol Jacques, her husband Bill Rumble, and Grayson Cook) to begin a campaign of false “excitement” over the “Agreement” memo from Autry CEO John Gray. Everyone knows the memo is nearly identical to the unenforceable proposal that Gray presented in September 2006 that the community, including Sekuler, rejected.

In our opinion, these individuals from Mount Washington are seeking to curry political favor by falsely claiming a divide of opinion – an old political trick. Instead of supporting community interests, these individuals are supporting the political playbook of the Mayor who, after three years of silence, has been seduced by the money of Autry and its law/lobbying firm, Latham & Watkins.

Sekuler will now lead this false campaign at hearings on Autry’s proposal to expand in Griffith Park by four times the size of the Griffith Observatory. Into this Autry behemoth, sitting on taxpayer land instead of land it owns here, the Southwest’s collection and identity will disappear. Thereafter, we think, the Autry will renege on the unenforceable “Agreement” touted by Sekuler. Autry then has the power to sell the Southwest Museum and take that money to Griffith Park too!

The story Sekuler et al are trying to sell to the naïve and uninformed is that our Museum really will become a “new cultural use” and “premiere public destination”. Autry refuses to make this “Agreement” enforceable so it is clear it exists only for the purpose of Autry looking “good” in the upcoming hearings.

Sekuler is a polished media relations executive for NBC Universal. He “spins” positive messages for Universal including its controversial $3 billion development project. This project is supported by the Mayor, Councilmember LaBonge and, like Autry, is also represented by Latham & Watkins. Sekuler’s diminished enthusiasm for holding Autry to its promises coincides with the announcement last fall of Universal’s ambitious plans.

Everyone knows that Sekuler cannot simultaneously serve the interests of the community and those of his employer. So now he emerges as the de-facto PR spin voice for Autry in Northeast LA. What better way to assure the Mayor continues to support Universal’s $3 billion traffic nightmare in the Cahuenga Pass than Sekuler’s help selling the Autry plan?

Autry wants this to devolve into a personality match between a few political operatives with a minority opinion and the overwhelming majority of Los Angeles represented by our Coalition. Instead, it is the time to:

• Hold accountable the Autry, Mayor, Councilmember Huizar, and these Mount Washington individuals for the misleading press conference at the Southwest Museum.
• Raise our collective voices to defeat the portion of Autry’s plan to expand so much in Griffith Park as to enable it to impair the Southwest as an important Northeast economic development anchor.
• Open our wallets to pay for enforcement of Autry’s promises.
• Tell the world about Autry’s breaches of fiduciary duties.

We are not going away until Autry stops trying to destroy the Southwest Museum in the Arroyo Seco -- the dramatic place where Charles Lummis envisioned a museum to serve the people of California and to educate your children.

Community is Ill-Served by His Poor Leadership

Let’s consider the question of leadership for a moment. In a democracy, does the true leader lead or follow? Does he or she follow the wishes of those they serve or do they merely follow their own? Does a leader play by the rules or deconstruct them to serve their own ends? Do true leaders make up the rules as they go along?
One of the most unique and precious things Los Angeles has as a city is the Neighborhood Council system—a network of locally based citizen politicians elected by their neighbors. When administered properly, they are a strong and dynamic entity that can pay off with tangible changes in any neighborhood.
Used improperly, as in the case of the Glassell Park Neighborhood Council (GPNC), they can be a neighborhood’s own worst enemy and used only to further the goals of one group, or one person, in this case.
Bradley (He uses one name only), is perhaps the most stunning example of what can happen when ignorant leadership leads a Neighborhood Council astray.
Many in Northeast LA (and beyond) were appalled by his behavior last Spring as he attempted to bar a citizen from videotaping a GPNC meeting, and then simply lying to her as he demanded that she stop or leave the meeting.
It has happened again and again, at almost every subsequent meeting, when he, as an elected official, simply refused to answer any questions regarding his clear conflict of interest in the Victory Outreach Sign matter. He routinely refuses to answer our questions, and we stopped asking a while ago, opting instead to let facts speak for themselves.
Documents clearly show that he was in the employ of Victory Outreach when he was voting (in violation of procedure) in their favor.
He is a manipulative and arrogant leader, but without the strength of knowledge that the best manipulators hold. What we are left with is an ill-informed bully, who has recruited friends and business clients to further his goals and eventually line his own pockets.
To be clear, no one is accusing Bradley of actually stealing, but there is a pattern of action that begins with recruiting members of a church to run for election of a board you hope to control. They pay you to massage their case in City Hall, and your business grows.
What developer wouldn’t hire the chair of a neighborhood council to expedite his case in council chambers?
His poorly planned, unfocused and illegally over-budgeted upcoming Diversity Forum is only the latest example of his not playing well with others. We are not against the concept of a Diversity Forum (though its sounds like a lot of word noise), but we might be more supportive if anyone actually knew what it was.
Add to this his profound ignorance of parliamentary procedure—who can vote when, who can spend and how, and how to hold a meeting—and you have a community that is ill served and at the mercy of a capricious leader.
We don’t expect to see any current members of the GPNC Board rise up and call for his removal. Indeed, the Council amazingly does not have a bylaw mechanism for the removal of leadership.
We would ask them however, to take a good hard look at what is fair, who has benefited from his leadership, and who has lost.
Bradley, for the good of the community and your own future, leave the council of your own volition. Perhaps in the developer/builder/city hall circles you travel in, your coat is still shiny. But take it from us, from where we sit, you are naked.
And we can already imagine your ire at this editorial. And that’s fine with us.
We’re not afraid to say it again. It is time for you to resign.
Posted by Edward Rivera at 9:37 AM 1 comment: