One Nation. One State. One City. One Neighborhood. 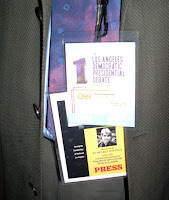 A National View From Northeast LA


Kodak Theater, Hollywood, California, January 31, 2008—Before you are too impressed, let's set the stage here. Minutes before the CNN/LA Times debate is due to begin, I am seated three floors above the theater in an upstairs press room. Just in this room, there are about 400 reporters from all over the world seated at their laptops. What is essentially the most important American presidential debate since Lincoln battled Stephen Douglas, is about to begin. A woman is battling an African American to be the Leader of the Free World. They are the final two after the original 17 candidates. If you're in LA, and remotely politically acute, this is the place to be. When I was 20, I wanted to be backstage at every rock concert. Im not 20 anymore, and now this is where I want to be. Plus the catering is better.
Though the actual audience is by invitation only, there is a small photo and press booth in the theater itself. But the bulk of the national and world press is here upstairs. A lot of familiar TV news faces are strolling though the press room, as well as a lot of familiar local media. The behatted Patt Morrison from the LA Times just said hello, and even the guy who runs the press box at Dodger Stadium is here.
CNN's Wolf Blitzer, his own biggest fan, is warming up the crowd, and mugging to the trough of "photogs," as he calls them. He's like the comedian who warms up audiences before the Tonight Show. But not as funny.

Let's Begin
It's struck me that no moment in the lives of either Barack Obama or Hillary Clinton is as gigantic as this one. All that they have achieved in their careers as politicians leads to this night. Both will be under the world microscope down to the last speck. Every movement, every tic, every hesitation, every hiccup, and every gesture will be scrutinized. Imagine yourself under the same lens, and you have just a tiny sense of what it is like to be a candidate. Both candidates are friendly, respectful, and on their best behavior as we begin.
The Republicans had their debate last night in an entirely different California than this one. Los Angeles is heavily Democratic, and tonight's event is essentially a lovefest. Here are two beloved Democrats in front of the faithful. Both of their positions will be similar. There are no Republicans to boo tonight. When one of these candidates faces off against a Republican, then the tea party is over. Hide the good china.
Following the debate, the press will make its way down to the Spin Room to be fed Word Noise by both candidates' people. Brave correspondent that I am, that is still more than I can stomach. I'll be home long before they stop talking tonight.

Heath Care
Both candidates agree on the importance of revitalizing the US Health Care System, which is simply a hornet's nest of lobbyists and anti-patient HMOs. Apparently the basic difference is the question of mandating coverage, something that Clinton favors. Obama is in favor of mainly making it affordable. Both ideas would turn the idea of American health care on its head, hoping to recreate a system that favors avoiding health care, into one that emphasizes prevention.

Immigration
In answer to the "Driver's License" issue, Clinton emphasized the need firsthand to redo the immigration system with a series of steps and rules for illegal immigrants, and both attempted to minimize the actual licensing question.
"Lets do it in a practical, realistic approach," said Clinton, who introduced immigration reform before Obama came to the US Senate. On the other hand, Obama attempts to nail her down after hinting that she has changed her position a few times during the campaign.

Experience
Let's face it. neither candidate is an old warhorse. Clinton is a youthful 60-ish, and Obama is a youthful 40-ish. No one gets here by accident or coincidence. It takes years and years of work in the trenches, and countless hours of unglamorous work over a lifetime of sweaty politics. "It is an exciting and humbling experience for both of us," said Clinton.
For his part, Obama carefully avoids criticizing the Clinton Years, and emphasizes the number of new voters that this election has attracted, always a critical issue. Clinton responds to an Internet question from a citizen and rocks thehouse when she said, "It took a Clinton to clean up the house after the first Bush, and it will take another Clinton to clean up the house after this one." If cheering was allowed, this room would have shook.

Iraq
Clearly, both candidates recognize the need for the US to extricate itself from the murky swamp that is the war in Iraq. While Clinton says she "hopes" we will be out in sixteen months, Obama emphasizes his position that American should never have gone into the country, a position this newspaper overwhelmingly supports. Happily, he also takes McClain to task—which few had really done yet—for his remark that the US should remain in Iraq for "one hundred years."
While Clinton gets a swipe for having originally voted for the war, this is a buffet for both candidates as they devour the Republicans on the issue. Obama nails it when he describes the the US as having "set the bar so low, they can't see it anymore."
Clinton counters with a cogent explanation of the parameters under which she voted for the Iraq War, while Obama strikes back, saying," It's important to be right the first time." I dont know many people who can claim that.

Clinton/Obama? Obama/Clinton?
"Its presumptuous," says Obama. Clinton agrees. Neither wants to commit to a running mate, while John Edwards is sitting and bravely smiling in the audience. As Obama pulls out Clinton's chair like a gentleman, the lovefest continues.

See you Super Tuesday.
Posted by Edward Rivera at 3:42 AM 1 comment: