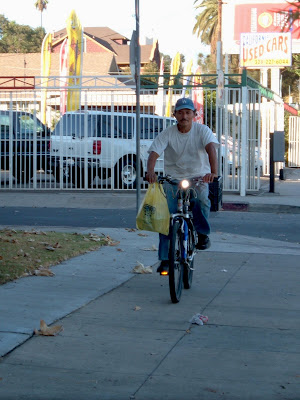 About 30 residents of the neighborhoods along the North Figueroa corridor gathered at the Flying Pigeon LA bike shop Friday evening to brainstorm ways to use the implementation of the Los Angeles Bicycle Plan to benefit the busy street.

The Los Angeles Bike Plan was passed by the City Council a few months ago after years of effort on the part of bike activists. But its implementation—and what it will mean for Northeast L.A. residents—is still rather up in the air.

The plan calls for a bikeway the length of the corridor, passing among the communities of Cypress Park, Mount Washington, Montecito Heights, Highland Park, Garvanza and Eagle Rock with connectivity to the Los Angeles River and the Arroyo Seco.

Flying Pigeon proprietor Josef Bray-Ali encouraged participants to see the implementation of the plan in the coming months as a time to “re-think North Figueroa Street.”

“Is a stripe of paint for a bikeway enough for us, or would we like to see better crossing points for pedestrians, faster bus service, quiet streets with less crashes, and a healthier street for business?”, Bray-Ali wrote in his public invitation to the discussion.

City Transportation Department ideas for the 70-foot wide street are pretty basic. A lane of traffic can be removed to allow for a designated bike lane. Or parking can be removed on one side of the street.

The diverse crowd that gathered at the Flying Pigeon was looking to be a lot more creative, not only in regard to where bike traffic can go, but also in regard to how implementation of the plan can support the health of the business community, economic development, safe routes to schools, traffic slowing, noise reduction, public safety, bus access and bright and vibrant streets and sidewalks. The Figueroa corridor was seen, not as a high-speed way to get across and out of Northeast L.A., but rather as the spine of a butterfly, with day-to-day life in residential communities going on in the wings.

Bray-Ali pointed out that there is currently a lack of awareness on the part of local merchants and the public of the fact that a great many of the patrons of local businesses are arriving by foot, bicycle and public transportation. Meanwhile, the planning focus for many years now has been on fast movement of cars. In essence, the group is looking to return the historic street to local merchants and residents.

North Figueroa is high up on the list of corridors targeted for implementation of the bike plan. The local residents who gathered at the Flying Pigeon mean to be ready to bring creative solutions to local problems in Los Angeles’ historic suburbs.

For information on further meetings: info@flyingpigeon-la.com

Posted by Edward Rivera at 9:14 PM

I love the way to learn through this way and I want to thank the admin because he/she did a nice job over here. The content helps me a lot to do by workings. I highly recommend this blog site.

Oh! Amazing exertion through the critique. I uncover few helps over here related by this post to complete my task nicely. I highly recommend this. Thanks a lot………BRIGITE`S

Useful to read! http://www.online-essay-writer.org/ Thanks for sharing!